I’ve been looking forward to today, as an oasis of calm, one that doesn’t need to involve people (the checkout cashier aside), and a day to just have some Time to Myself for ages.

So what do I actually want today?

What I’m going to do is write a list. In an effort to focus my brain (I’m definitely lacking focus), I shall first remind myself of what I’ve achieved this weekend. Then decide what still needs to be achieved before I go to yoga. I gave up on the concept of an ashtanga class today. I’m going to head to relaxation yoga instead. And then, come home, and, in all likelihood, be de-relaxed by yet another long and involved phone call with my Mother. N has been either at his, or at a rehearsal this weekend, and I miss him. The bed is All Wrong.

So. Acheivements, in no particular order:

I’d better get on with it. If I leave it much llo

Personally, I go with the first answer. And, until my local supermarket does something a bit more proactive than the second, I shan’t be shopping there.

Meanwhile, I need to go and check the felt situation before Towersey. I think we need more zombie green and grey.

Somewhere around, oh, 2006, someone published a list of 1001 books to read before you die.  It’s gone through a couple of editions since then, and I’m now trying to work my way through all the books listed in all 4 editions (1305 books. I’ve read 306 so far). I’ve spent a silly amount of money on books. I’ve racked up some impressive library fines. I’m attacking them in a vaguely alphabetical-by-author manner at the moment, standing in Pimlico Library with the 2012 edition, trying to find the books on the shelves. It’s not going well.

A month or so ago, I had a rash of Nigerian literature. All good and interesting, and it’s been infuriating that I can’t get all of Chinua Achebe’s books without ordering them. Prior to that, everything seemed to be South American. I am yet to read a novel by a South American author that isn’t beguilingly bonkers.

July and August seem to be full of homosexual angst. I’ve had Proust (he’s been ongoing for well over a year now) agonising as to whether Albertine’s a lesbian or not (he still can’t make up his mind, and he’s been debating this for about 300 pages now). There’s been William S Burroughs being Queer (having been a Junkie – both excellent books), and now I have James Baldwin telling me about an unhappy love affair with Giovanni. This is supposed to be particularly interesting because he created a furore on publication. Apparently straight black guys can’t write about gay white guys. Except he can, and he does it very well indeed. To counteract this, Martin Amis is talking about Money, and, so far, there’s only one vaguely redeeming character in the whole book. I’m 250-odd pages into that, and I’m finding the relentless pursuit of highs (legal, illegal, dodgy and straightforward) is beginning to get me down. It seems to have been getting the protagonist down since the beginning. Plus I can’t work out exactly how solipsistic Mr Amis is being: the main character is John Self. John Self is having quite a lot of conversations with the writer Martin Amis. It’s all just a bit self-referential.

And it’s a definite antidote to reading the Mitford Sisters’ Letters. Not that I really needed an antidote (except when Unity was telling anyone who’d listen how sweet the Furher was. That was a bit hard to swallow. Brave to publish that, I feel). In fact, I’m now very keen to read In Tearing Haste. And anything else Mitford related. They’re such a fascinating family.

I have today off. I’m to go dancing with a batch of Guides with disabilities. It’s likely to be chaotic fun. I must dig out the instructions for various country dances. I printed them off about 8 or 9 years ago, and we had grand fun in the church. Sylvester McCoy poked his head round the door to see what the noise was about.. 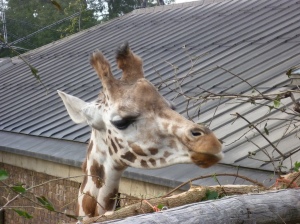 And we saw giraffes, gorillas, tigers, lions, penguins, butterflies, various shades of macaw, meerkats, otters, sloths (so graceful!) and an awful lot of drunk people in animal onesies, animal hats, face paints, and masks. Zoo lates must make an awful lot of money for ZSL, as they’re licence for adults to behave like kids, but with PIMM’S!!!!!

It was rather fun.

I’m trying to organise myself, and put together N’s birthday present. He’s gone to a grotty hotel in Hackney so that he can be in the right place to ride in the Prudential Ride 100 tomorrow. He apologises about the fact that most of central London is closed as a result of this.