I’m not sure I’m being the best listener to my friends at present. I’m trying to: but I keep needing people to listen to me. Well. I did this week.  There has been Work Strife. The job is lovely. The Team is struggling. In essence, it was pretty fine until about November, with only one issue that caused intra-team-stress and then, a second issue in the team meant that by the time we got to New Year’s Eve, all I wanted to do was find a new job. I’ve spent the last two months not wanting to go to work, getting worked up about going to work, sleeping badly before going to work, and generally feeling a degree of dread about it all.

Yesterday, I sat down with my boss for half an hour. The wonderful L had given me full ear, and some perceptive insights at coffee the night before, and I felt able to sit there and express my concerns. He listened. He agrees with my assessment of the situation, and he’s desperate for me to not look for another job (well, actually, I can’t look for another job for at least 12 months, because there’s Far Too Much other Stuff going on this year), and also for there to be no massive bust up in the middle of the office. He’s going to seek further advice from his manager because he agrees we cannot continue in the current configuration. I think it helped that this week, we were missing one of the issues, and thus the other issue was far, far, easier to cope with. I can manage one issue. I can’t deal with two so well.  Next week may be different – both issues will be present.  I have promised to tell my boss if I start feeling that I don’t want to come to work again.  I can work from home, and, I think he’d rather I did work from home a little more frequently if that’s going to make the difference.

I do appreciate it when my friends listen to me. I know I can witter on (particularly about Brownies). I do hope that I do as well when it comes to listening to them.  But, having someone listen, and having them reinforce that I wasn’t totally barking, and that I did need to speak to my boss meant that I had the confidence to set a time to do that.  Hot chocolate and a brownie and some knitting also helped me work through what needs to be done.

And then, there was Brownies, and then I came home, ate macaroni cheese and finished N’s sweater (the sleeves were too short on the first iteration) and knitted some more on other L’s mitts.

Here. Have some more knitting pictures and a bonus picture of me being a DINOSAUR! 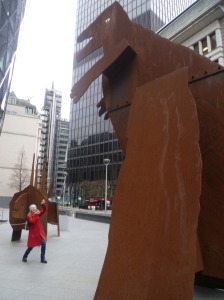 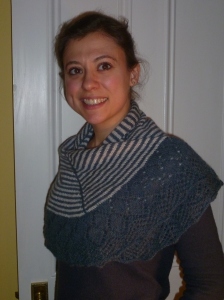 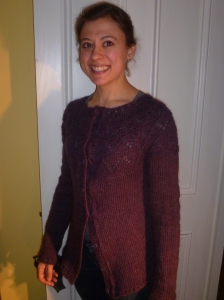 3 thoughts on “My apologies”