Next, eat your supper in the queue. You’re not supposed to eat inside the hall. People eat inside the hall anyhow (gone are the days when we used to lurk in the corridor, nibbling sandwiches). The only time the stewards get upset is if you look like you’re drinking from a glass rather than a plastic cup. It’s a bit of a toss up. Either you eat in the queue, and have to perambulate a bit, or you eat in the hall, and the stewards make you get up and move forward to accommodate more people.

But consider what you drink in the hall. There’s alcohol on sale. Hurrah! Booze! Very useful during a 3 hour concert. HOLD ONTO IT AT ALL TIMES.  It’s a 3 hour concert. You will fidget. You don’t want to kick it over – it’s not cheap. You don’t want anyone else to kick it over either. And other prommers tend not to take kindly to being sprayed with Guinness mid-movement. If you do have the misfortune to kick over your alcohol (or to kick over someone else’s), apologise profusely at the first opportune moment (between movements, or during the applause), proffer a copy of the Evening Standard to mop up the puddle, and find a steward at half time for a more thorough clean up. Don’t leave the person you spilled beer over to do this for you. They will give you the evils.  Bring your own bottle of water. The lovely people behind the bar will refill it for you, but only at the tail end of the interval. It’s a bit hectic at other times. There are no cold water taps in the loos.

Bring a copy of the Evening Standard. Amusement while in the queue. Something to stand or sit upon during the concert (the floor is sticky, owing to the inadequately cleared up beer).  Something with which to soak up the beer. Better still, bring a cushion or a foam mat as well as the Standard. Your sitz bones will thank you.

Fidget thoughtfully. You’re going to fidget. No-one can stand stock still for that long. But remember. Loose change rattles, and it never jingles in time to the music – so if you can’t resist, either put it in a purse, or in a little pile in front of you. Some people do feel physically ill if you start waving your arms around out of time. Audible toe-tapping is generally not scored by the composer. You can stand up and sit down (and lie down), but don’t do it at the speed of the first violinist’s elbow, and try not to shift about massively much more than once per movement. Leave the phone alone. Leave the tablet alone. Leave the camera alone. If desperate (and some premieres are very hard to listen to) it’s fine to read – but try not to produce a distracting glow while you’re at it. And please, don’t pull the velcro open, or fiddle with the zipper on your bag. Get it all out ready before the concert starts (exceptions for getting something to mop up the beer that someone kicked over your legs are permissable).  You’re standing, yes, but everyone kinda expects you to behave just as you would if you were sitting in the expensive seats.

Wear comfy shoes. You may be standing for 3 hours. For crowded concerts, you’re almost certainly standing for three hours – there won’t be space to sit or lie down. If you must take your shoes off, consider pre-spritzing your toes with peppermint spray in the loos before you enter the hall, and regularly clean the inside of your shoes with surgical spirit in order to remove malodorous odours. No-one wants to smell stale feet.  I find Clarks Air and Birkenstocks the most comfortable shoes. Converse occasionally. Mix it up between proms.  Practice sitting down on the floor – some shoes are suprisingly spikey in odd places.

Wash. OK. You will get sweaty getting to the concert (particularly if the District & Circle Lines have one of their periodic failures), in the queue, and during the concert. But you can make sure it’s fresh sweat.  While we’re on smells: try not to fart. If beans make you fart, don’t eat them beforehand. It can get a bit overwhelming.  The taps in the loos are boiling hot and rather high pressured (the lavatory cisterns are rather low pressured): you will spray yourself in water, and the floor gets kinda slick.

Don’t whisper. If you can’t wait until a suitable break, murmur quickly. If you must talk – go into the bar. The concert’s streamed in there. Whispering carries, is annoying, and will invaribly in someone grumpily “SSSSH!”ing you if you persist in producing a running commentary.

Stay at home if you’re ill. Listen on the radio. You’ll not knacker yourself, and the rest of us won’t catch your lurgy. Much cheaper and better for everyone. A very similar concert will be on next year. Don’t sweat it.

Make up nicknames for your fellow prommers. Just don’t call them by them by accident. And keep an eye out for the wonderful gentleman in the panama who visits the queue most evenings. Last time we saw him, he confided that he’d written both the Brahms and the Janáček. We didn’t find out which is his favourite…but we’ll ask next time.

Try not to fall asleep. This can be tricky if you’re lying on your back in a Late Night Prom, and the music is as sublime as a choir of angels. Best idea: don’t lie down. Or take a friend to prod you.

Consider how you’re clothing your lower half. Yes, there will be several people in cycling gear, so don’t worry about lycra. Skirts however can do all sorts of interesting things when you sit on the floor – and you’re likely to be stepping over people who are sitting on the floor, or lying down, on your way to the loos/bar: decide how much you want to flash them.

I wish she were here. Missing her, and N’s dad, give this wedding a bit of a hole.

We’re back at N’s Dad’s. But it’s not N’s Dad’s house now. It’s A’s, his wife’s. His widow’s. Today we planned a funeral. Not the first time I’ve helped plan a funeral (the first was my Grandmother’s. A different sort of affair – neither Mum nor I were particularly upset: she was 92, and while she was always loving to me, she wasn’t so loving to Mum). Won’t be the last. Will be, like these thing should be, a good send off.

The silence is almost oppressive. No snores from the next room. No Radio 2 filling the gaps. He is not here.  He really is not here. All the medical stuff is gone, at last. All the phone numbers on the board. There’s more boxes of tissues in case of need. The house is full of him, and it’s full of people: but he is not here.

If I Should Go – Joyce Grenfell

If I should go before the rest of you
Break not a flower nor inscribe a stone
Nor when I’m gone speak in a Sunday voice
But be the usual selves that I have known
Weep if you must
Parting is hell
But life goes on
So sing as well.

Possibly in an extremely PollyAnnaish stick-my-head-in-the-sand manner. However, there is diddly-squat that I can do about the fact that N’s Dad has taken a sharp deterioration, and hasn’t been responsive for some days now.  We’re still sitting, working at his dining table (it’s Wednesday), and I’ve been in for a little chatter (his friend Sparrer has got ferrets and had sent a photo! I got very excited about this…). He’s just there. Peacefully lying there. Not snoring anymore, which I rather miss as a sound effect. Just a bit like an empty shell. I think the end is in sight.  Definitely peacefully. Which is a mercy.

So. I’ve been spinning. Look: 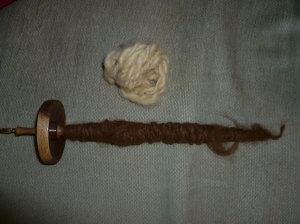 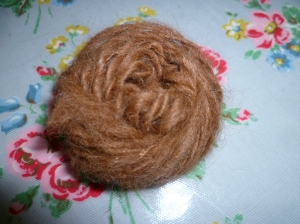 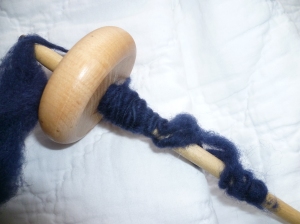 I got a bit better when Nikki-On-Facebook told me about staple lengths, and I grasped that I needed to pay attention to how long the fibre is, and how much I pull it out at any one go, and how much crossover you need in the fibre lengths.. I’m getting a bit bored of navy (I have some pale pink, some natural, and a bit of flame red-and-yellow roving to play with. Only the last of these can be described as anything other than desperately pedestrian). I have bought a little of this. I’m still at the park-and-draft stage, but occasionally, I manage to let the spindle spin, and pull fibre out while it’s spinning. I do like this Tour de Fleece malarkey.

I’ve also been knitting. Booties for the WebDev’s baby (which was due on Friday), for my favourite PM’s baby (due in December). Then there’s a cardi for Nikki-On-Facebook’s baby (I have shelved cardigan #1, I hate it. Baby is now over a month old), a toy for N’s sister’s baby (due December), and something for J’s baby (due December). And wristlets for me, in some rather fancy silk-mix stuff bought by the lovely L.  Socks for Eff. I finally finished my wedding shawl. Lookit? N’s seen it… 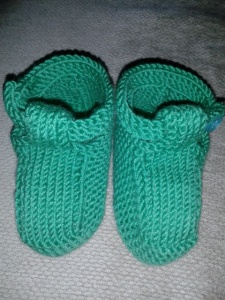 I’ve stopped doing Brownies – I’m now “just” Div Com. I’m hoping that the guidemin will thus remain at a sensible level, rather than threatening to overwhelm as it so frequently has for the past year or so. Between guidemin, and wedmin, it’s often daunting to look at my inbox, and I’ve developed a tendency to run away from it. Must choose a date for the leaders’ weekend away. And book it.

Is everyone pregnant right now? Two days, and two happy announcements.  There has to be something in the water west of Watford.

My apologies. The ticking noise is probably so loud that you can hear it from where you are…Meanwhile, three baby items to knit due in December and January. And another in about October, and another for next week (and another’s already arrived, but was much bigger than I anticipated, so needs a different garment!).

On the plus side, I have finished my wedding shawl. Pictures when it’s not dark, and I’ve got the camera out. I did take some on the phone for Ravelry. They are godawful pictures. The shawl itself is quite impressive.