So I went and took photos of all the nice old cars, before they got moved. They’ve stopped filming with the nice old cars, but the road’s still blocked off (I may go and do a bit more stickybeaking soon).  The really yellow cars seem to act as punctuation points – beyond them, we are back to the usual round of new cars.

I also need to take a picture of the “Taverna” that’s popped up in the street next to the blue car (I wasn’t paying attention because, you know, OLD CARS!). It used to be a record shop, and it’s evidently been dressed up for the film. Location stuff, dontcha know. 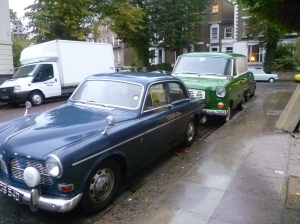 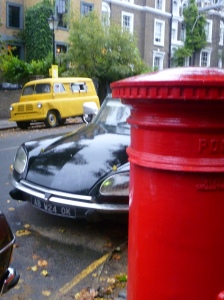 Halfway through a pair of Socks for N.

2/3 of the way through the knitted bunting (I knew I’d end up knitting most of it. It’s easy, but there’s other stuff I want to knit).

4/5 of the way through training for a half marathon – yesterday was 12 hilly miles (slow) and I got bitten by something itchy.

And just starting to copy the wedding video onto memory sticks to go overseas.

I’ve also had 9 hours of sleep, which is fabulous, and thus I feel a heck of a lot less pre-menstrual and more able to deal with the world. Coffee ahoy!

PSA: If you’re straining home-made yoghurt through a tea towel, you need to wash that tea towel IMMEDIATELY you’re done straining, or the pong won’t come out. Until you do wash it. At which point it will come out into EVERYTHING that you’ve got in the washing machine with it. And then you’ll have to do more laundry. Next time, I’ll put it into soak with some detergent rather than leaving it sitting there for 24 hours.  N won’t necessarily notice that his running tops smell of stale milk (his sense of smell is erratic, to say the least). I shall. Bleagh.

Home-strained yoghurt is rather wonderful, though. And cheap. 50p for a small tub of yoghurt. 90p to make up to 1 litre of yoghurt depending on how much you strain it. If organised, the last of one batch can turn into the first of the next batch. Honestly. That yoghurt maker has paid for itself and then some. And it makes it so simple to make yoghurt. I don’t have an airing cupboard, and the hot water tank is right next to the bin, so not exactly what you’d call a hygienic location.

I’ve now got a fitbit. Today I have walked 20,000 steps. Partly because I’ve done a 10.8 mile run (in two sections – there’s always a pause after finishing parkrun in order to get the barcode scanned, and I always manage to join the longest, slowest queue to get my barcode scanned). Parkrun was slow – it’s the really hilly route, and I was feeling shattered by the time I’d made it up there (must eat jelly beans before embarking on parkrun, in this situation, not after. Two miles uphill is, well, two miles uphill. It’s tiring!). I then ran the route again, because I needed the extra miles, and headed back home. And saw Michael Palin by the overground station, which made the whole thing entirely worthwhile, causing me to grin wildly, and probably bemused him greatly “Oh god, another fan grinning inanely. And a really sweaty one at that!”.  Given that I was convinced I wasn’t going to make it to the start of parkrun, I’m very pleased. The parts of the run I’m not pleased with – well, I know what to do about it. If feeling shattered, EAT SUGAR!  Given that this morning started off with an ex’s ex-wife talking about Westerns on the Radio (and sounding way more sane and sensible than he’d painted her as being), this was something of an achievement. It all got so much better having been for a run. I recommend it.

I’ve finally managed to book an appointment to get 4 inches lopped off my hair. I’m knitting bunting. I’ve managed to pay in the cheques. I still need to sort out Gift Aid properly. I don’t have a corrected wedding certificate (still). I think it’s time to have a cup of tea…

Running’s been a bit in the doldrums of late. Too much good living. Then a cold. On Friday, I went out for a run and was running a good 20 seconds slower per mile than my PB for a 10km race. And that was across 3 miles. And it felt like hard work. So I’m rather pleased with this morning’s 10km race, which was only 1 minute off my PB…If I can just knock off another 10 seconds per mile, I’m in there. It was an effort this morning, I won’t deny that – but it wasn’t half as bad as I thought it might be. This is what comes of running in a group, rather than running on your own. There’s people to overtake. People to keep up with. People to identify as nemeses (essentially, anyone who’s wearing barefoot running shoes). So, there is hope and I’m not as hopelessly unfit as I thought I was. In a month, we’re doing a trail half marathon, which should be fun. And then we’re aiming to do the Berlin Marathon in September 2015, having missed places for London. That’ll be our holiday: a package tour to do the Berlin Marathon.

Other achievements this weekend: getting the Guidemin under control; sorting out my tax return; laundry; cleaning the front of the cooker; sewing on lots of buttons on new-to-me coats (for £100 I’ve got a new light weight coat and a new winter coat – the one is White Stuff, the other Whistles. I’m such a cheapskate…); sorting out a wedding photo album; going to the cinema and having an apoplectic fit that anyone could get away with displaying and using their mobile phone in the Travellers Club.  I realise that one is supposed to suspend disbelief for films, but there are some things that cannot be ignored.

N has gone to watch Spurs. I hope they win. He’s not a happy bunny, having done something peculiar to his shoulder which has prevented him running today (he has an appointment, or, in N speak, an appippment, as our Chiropractor is called Pippa, to be crunched back into the land of the living on Tuesday).

Would you like to see some recent knitting? But of course. L got her socks yesterday, and couldn’t be more thrilled. 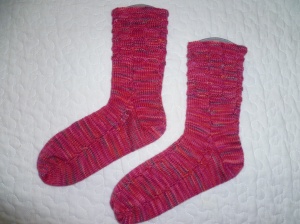 And then, some pictures of the poppies at the Tower of London. I was on a course nearby last week, and got to walk past every day. And the sunshine was rather lovely one day, which made for better pictures. 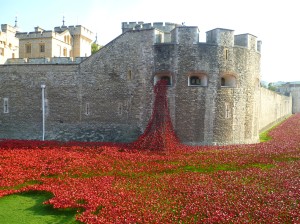 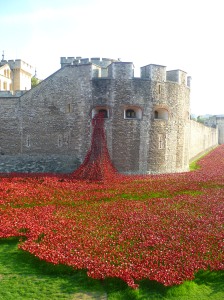