The last two weekends have been grand fun, very amusing, and insightful.

Lovely K got married on 20th June. The protests about the anti-austerity march conspired to make the bride extremely late, but she looked utterly lovely when she did get there (and her hair mostly stayed put throughout a somewhat sticky day. All Hail Elnett!). Beautiful service, a highly personal reception (the favours were in coconut shells, carried over by African Swallows), lovely flowers, and a radiant bride and groom. You couldn’t really ask for anything more, except a dang good disco, and that’s what we got. 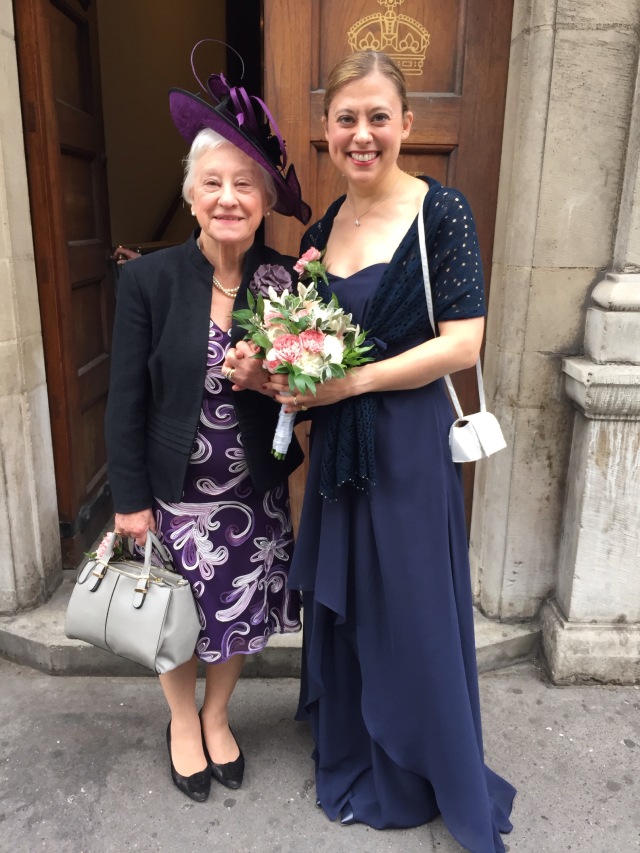 Sunday, I ran 12 miles. This went rather better than the previous Sunday’s 10 miles – I didn’t fall over for starters. This is just as well. Over a fortnight after falling over, and I’m just about in the position where I feel comfortable showing my knees in public again. I am very pleased that the dress I chose for Ascot covered both knees and the arm bruise – by the wedding, I was so desperate, I was buying theatrical makeup to cover up the mess (this was reasonably effective and also reasonably cheap). I’ve gone through almost an entire tube of arnica. No idea if it’s helped the healing process, or if the mere action of rubbing the cream into the bruises made the difference (it’s all clots under the surface, is bruising, so it stands to reason that if you can bear to rub the bruise, it will dissipate more quickly). Oooh! I can show the Ascot outfits. Mum and I had a lovely day last Tuesday. We saw the Queen twice, but didn’t really win anything. Got chatted up by someone who turned out to be the manager at Mum’s local supermarket. It was excruciatingly awful, and I couldn’t escape until after the race we’d gone to watch was run. My Mother was No Help At All, as she expected him to give up after my first polite brush off: he was a persistent blighter, and I think I’m old enough to be his mother…

This weekend just gone, I spent three hours in Girlguiding Safe Space training, and realised that when I was bullied as a child, I wasn’t supported very well. I was left to get on with it, told to ignore them, told that they were scared of me (really?), and I only remember one intervention by a teacher, which was reasonably effective. By that point, though, I’d been bullied in one way or another by various people for 9 years. I was utterly inured to it. Nothing particularly physical (apart from the horrible child who used to pinch me when I was six, and the one who tried to scratch my eyes out when I was nine). Mostly emotional. By the time I was 14, I didn’t really pay much attention to it: I just thought it was normal…it was a shock when a friend pointed out that, really, what people were saying to me wasn’t on. This was quite the realisation for a Saturday morning. I’m still processing. It was a really good training, and I do recommend it. Worth the mild anxiety attack.

Sunday I attempted a 10km race. This was about as successful as can be expected on a hot, sticky, humid day. Asthma doesn’t like being asked to run about in those conditions. I started really well – sub 8:30 minute miles. Then had to grind to a halt to wheeze. Then decided that, actually, it wasn’t worth another wheeze but it was worth finishing, so set off again at something closer to a 9:30 min mile. Overall, 8:50 min mile. Annoyingly, it rained about an hour after I’d finished, and oh! The aftermath of the downpour would have been perfect.

I am not sure that this week’s training plan will quite happen the way it’s supposed to. Tomorrow is intervals. Then a ploddy run. Then a less ploddy run. There will be yet more early mornings. On the plus side, I am sleeping really well, and not waking up with the dawn. On the minus side, I actually want to be waking up with the dawn so that I can go running before work. This is something of a dichotomy, as well as being immensely frustrating.

I have finally finished knitting the sweater I cast on in February (it got interrupted by wedding knitting). I am down to the heel of the second sock of the pair I started I don’t know when. I’m knitting mittens for R, and they are going beautifully now I’ved decided green-on-purple is much better than purple-on-green. I love stranded knitting. It goes so fast, partly because of the excitement of seeing the pattern come out row by row, and partly because the excitement keeps you up knitting well past bedtime. There will be a photo. But I’m yet to take it.

27.7 miles this week. In my vague running club, I’m currently top of the leader board for distance (until the usual leader logs his Sunday run, anyhow. I am enjoying this achievement). 10 miles this morning, faster, apparently, than I’ve done parts of that route before, and reasonably easy going. Slow running – I was aiming for a 10 minute mile, but the idea is to build stamina at this point, not speed. I averaged a 9:49 minute mile.

The other idea was to remain upright at all times on this run (didn’t quite manage that). I fell over on a slippery wooden pontoon on Regent’s Canal. I have bruises on both knees and on my upper arm. I’ve applied a metric f-ton of arnica, and organic frozen peas to try and reduce the ridiculous lump on my right knee. I’m replanning my outfits for the week to disguise the mess. And I’m going to have a visit to a cosmetics counter on Friday if I’ve still got an epic bruise on my arm, to get my concealer matched for disguising the bruise on Saturday. It’s a good thing that I’ve got a long bridesmaid’s dress, or I’d be needing thick tights to cover the mess. You do not want to see my knees.

Yesterday’s run was also faintly disastrous. I got a bit overexcited in the last 100 metres of parkrun, promptly had an asthma attack, and had to slow to a walk. And it was one of those really exciting asthma attacks where I ended up sounding like a broken concertina played by a beginner. Fortunately, the inhaler kicked in.

Did anyone bother to help with either of these incidents? Did they heck. I had to get home to the care of my husband, who has produced frozen peas, tea, sympathy, kisses and did the majority of the work when it came to shifting everything to hoover behind it so that we can try to de-moth the flat. Sodding moths. They keep eating things I like, if they’re not sealed and not alpaca. They don’t seem to like alpaca. Various things having been having sojourns in the freezer.

It’s been too hot to knit. And I’m crocheting bunting anyhow (it is more fun than knitting bunting. Novelty value).

Answer: running. I’ve started the 17-weeks-until-Berlin marathon training. This involves getting up inordinately early for a run three times a week, and two runs at the weekend. I shall be shattered, but buff. And I’m hoping my 10K pace does actually go back down to sub-50 minutes (last seen in Feb 2014, while training for a marathon…)

I’m fighting moths – they are coming out of the woodwork with the warm weather. There appears to be a sub set in the acrylic yarn in the shed, and that’s going to be binned when I pull myself together somewhat. The three shades of acrylic which I need for crochet bunting are in the freezer. They can come out for a bit, then go back in again to be sure. I’m crocheting bunting this time round. We made knitted bunting last year and I ended up knitting an awful lot of triangles to deadline and never want to knit one again (I do not like knitting to deadline!). Crochet will make a nice change.

It all comes back to time, really.