We’ve been married for two years! And it’s brilliant….

(This is one of my favourite pictures of N).

N has bought himself a turbo trainer: Tallinn marathon definitely isn’t happening for him, as his Achilles is still niggling (but seems happier with cycling than running. And, if getting a bike ride in means he’s a happier bunny, I am Very Much for this. Even if it does mean a bicycle in the dining room. Grumpy husbands are No Fun at all).  His anniversary sweater is still a work in progress – it’ll be done by October. Knitting denim yarn involves getting black fingers. Black fingers come off on everything, but are impossible to clean. He says he can tell where I’ve been when I’m knitting his sweater as there are little fingerprints everywhere.  He’s been wiping them up.

I, meanwhile, managed a nice long run on Sunday (10 miles) and a slower parkrun on Saturday. I got quite upset by parkrun – a lass, about 9 or ten, was running, and struggling, and sobbing her little heart out. She managed to catch up with her Dad (aren’t under-10s supposed to be within arms reach of their responsible adults at all times?) who was really rather yelly and overbearing with her. So I suggested that she run and listen to my breathing (she sounded absolutely asthmatic), as I’m really loud at breathing, and that slowed her just a bit, so she could catch her breath, and she was OK after that – but, really, it felt like her Dad was pushing her for his own benefit of “my daughter can beat xyz” rather than making sure she enjoyed her running. It just wasn’t fair. You do not want to hear a child sobbing for her Daddy to stay with her. You just don’t.

We went to see The BFG on Sunday. We had free cinema tickets from the health insurance. I’ve now ordered bits and pieces to make glowing dream jars and whizzpopping corgis with the Brownies. I am so looking forward to this. I worked out the prototypes on the way homes from the cinema.

Monday we cleaned out the Guide Loft. Six of us. It took six and half hours, but you can now see the floor in there, everything is neatly in boxes and labelled, the tents have been consolidated, and we’ve binned about 10 bags of unused, sticky, broken, stuff. It’s all organised by theme, and we can Find Stuff. Totes amazeballs. I am slightly bruised, and needed a thorough sluicing down afterwards. I also made the mistake of failing to eat lunch, and having an inadequate (although tasty) supper from Marks & Spencer on the train home, accompanied by a gin-inna-tin. Those things are lethal. It took four hours for the thing to wear off. I am such a lightweight. 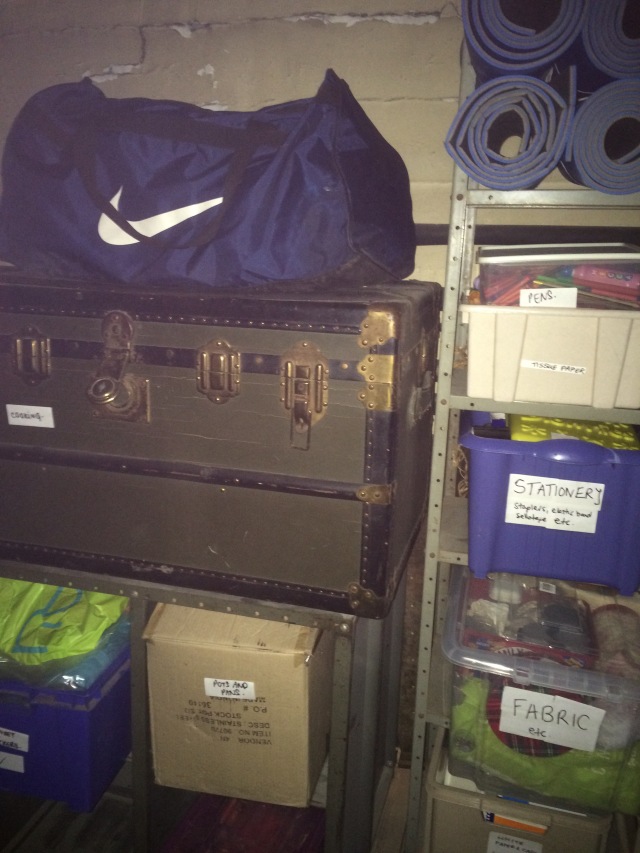 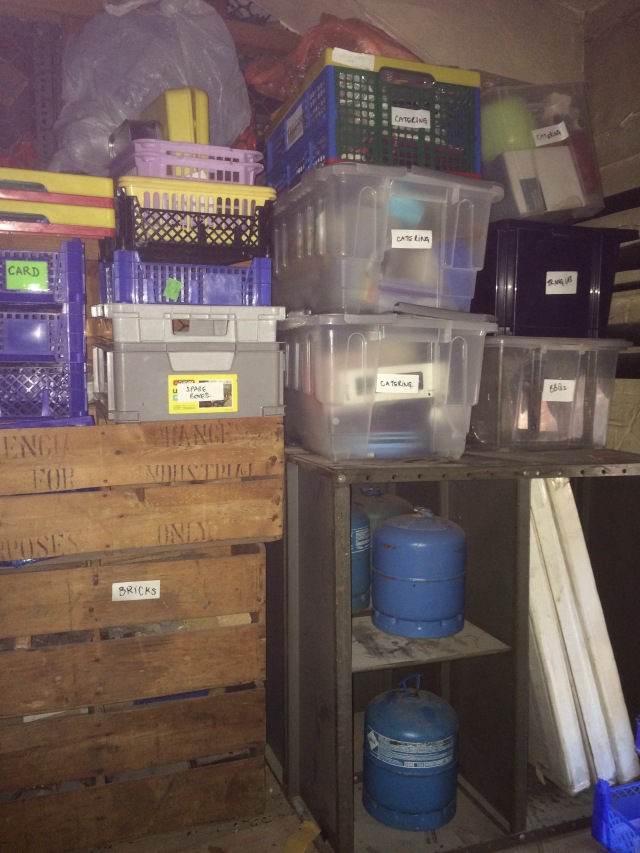 You can see the floor. This is what it was like: 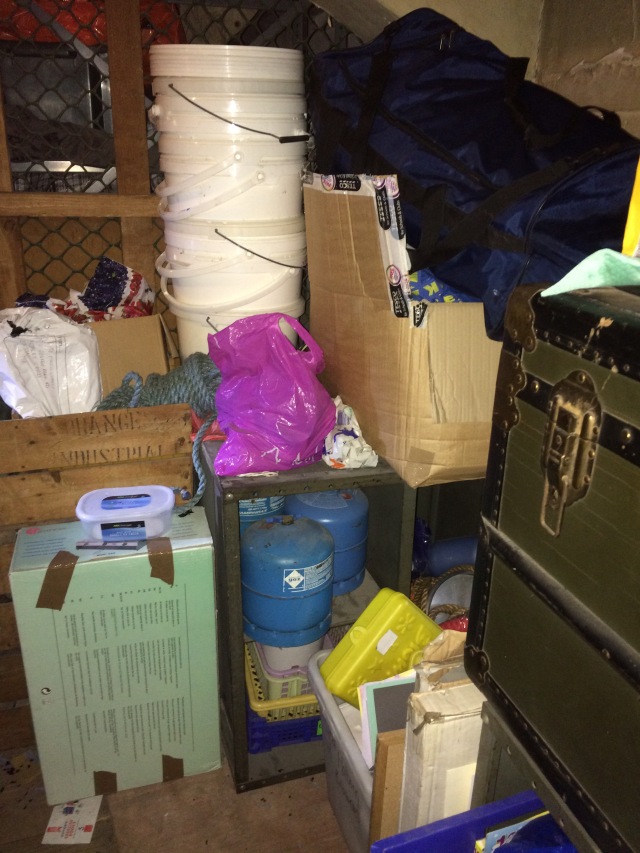 As you were. I had chocolate yesterday. I may have some today as well.

Because it’s three weeks until Tallinn half marathon, because N is probably not running the marathon, which was the whole point of the exercise (his Achilles just is not playing ball).

So of course I don’t want to run it. I don’t see the point. I’m lousy at running. I’m rubbish. I’m slow. I look ridiculous. Why on earth would I want to travel that far to run a race that I never wanted to enter in the first place? Wouldn’t it just be cheaper, and less hassle, to stay at home and watch the Last Night of the Proms instead?

I also have woe because I don’t want to be in the position where the only hope of a baby is IVF. There’s been a massive spate of new babies on facebook this week. Two of my best friends are pregnant (and due within weeks of each other). My body is a failure. I am a rubbish gestational vessel. I am, frankly, old and past it. For running. For babies. For everything.

Maybe I just need some chocolate?

Totally overexcited here, as I’ve knocked a whole 16 seconds off my parkrun PB! I was 40 seconds off last week, and had been partly stymied by getting stuck behind people (there’s a few bits on our route which are pretty much single track only, so you have to take it gently, and just enjoy the run and the canal): I knew I could manage the route quicker because I’d felt strong. However, this week – I put myself near the front, set off like a bat out of hell (is there any other type?) and managed to maintain something appropriate speed-wise  as I went round, and, crucially, didn’t get stuck behind anyone. 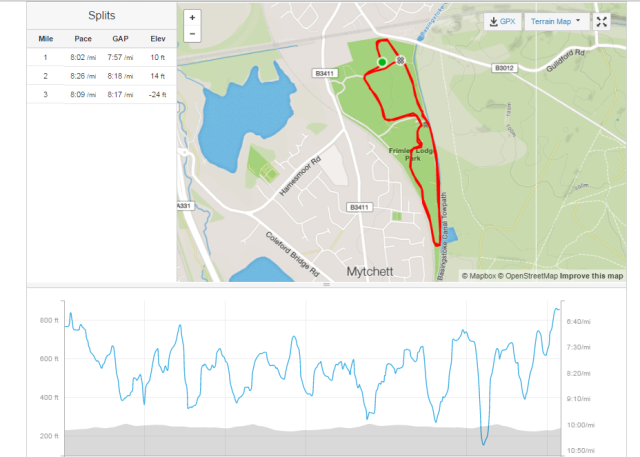 It’s still quite an uneven trace. I will one day get the knack of running evenly. Maybe. Perhaps on tomorrow’s long run – there’s three weeks until Tallinn half, with N doing the full marathon, and long runs are definitely a feature. After that – we have one race (Thames Meander, 5th November) booked in, and, frankly, that may be iffy from my perspective. We’re starting down the route of IVF – and all the indications are that it’s a really really bad idea to go running during the phase where it’s all about stimulating the ovaries to produce eggs. So, depending on the wait time (about 8 weeks from them getting the letter), there’s going to be a sudden drop in running and a sudden increase in walking and yoga. Walking and yoga are apparently OK. And, since the aim here is a baby – yeah, I can manage without running for a bit. And then, hopefully, I’ll be running like Mary again…

Two weekends ago, we went to Prague. We had the loveliest time – I really enjoy spending three days with just N, wandering round, seeing things, having a proper mental break from work and adulting, and just being US. 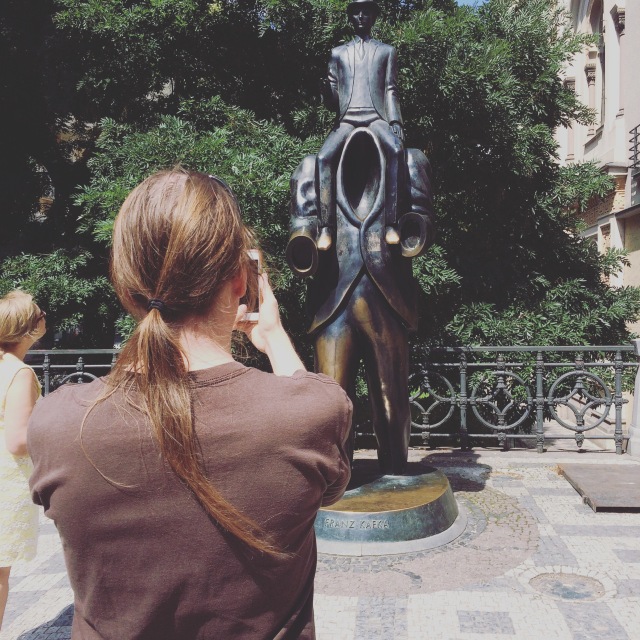 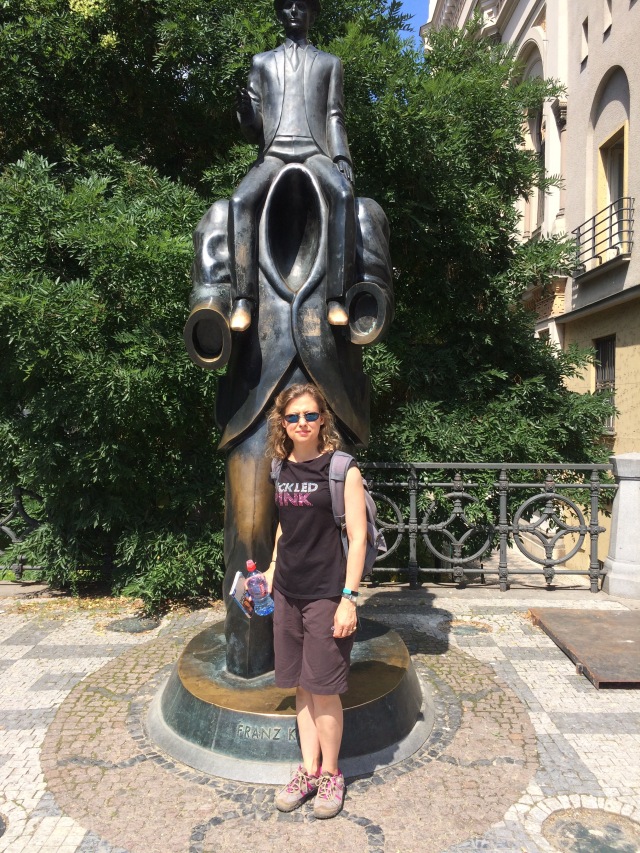 Because N is hard training for Tallinn (although injured – so not as hard as he was for Berlin), I booked him, and me, into a running tour of the city with Running Prague (basically, I’d Googled Prague parkrun, and this is what came up – there is no parkrun in Prague, but I found something far more helpful). We both wanted to do 10 miles over the weekend – and I just reckoned it would be far, far simpler to have someone guide us rather than trying to figure out a route in a foreign city. This worked out brilliantly – on Friday, N went out with Martin, at a healthy 7:37 min/mile (his marathon pace. I know. So. Fast.) and on Sunday, Martin’s girlfriend Pavla took me out at a rather more reasonable 9:16 min/mile for more-or-less the same route. It was brilliant! She was recovering from a really fast race the day before (she, like Nick, has managed a Boston Qualifying time, but it turned out to be just too slow), so was perfectly happy to be pootling at my pace for 10 miles. I, meanwhile, put a bit more effort in than I might have done so that I didn’t entirely let myself down. We even did a hill. Pavla runs that hill quite frequently – and it’s showing in her form! 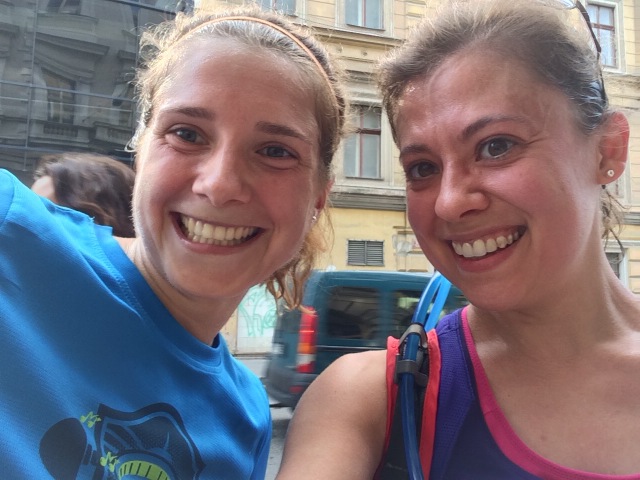 On the Saturday – N and I went out together, got hopelessly lost, stopped and started, couldn’t get into rhythm, and found the whole five mile experience somewhat stressful. Prague’s got no right angles to its streets, so it’s really easy to get lost. 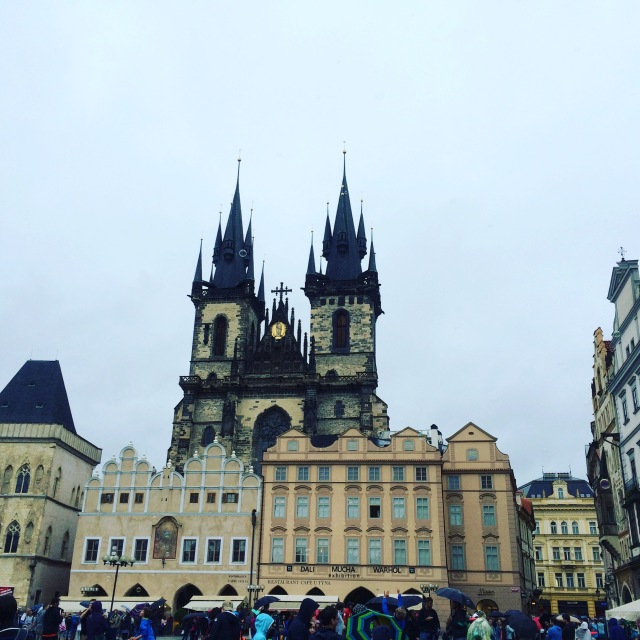 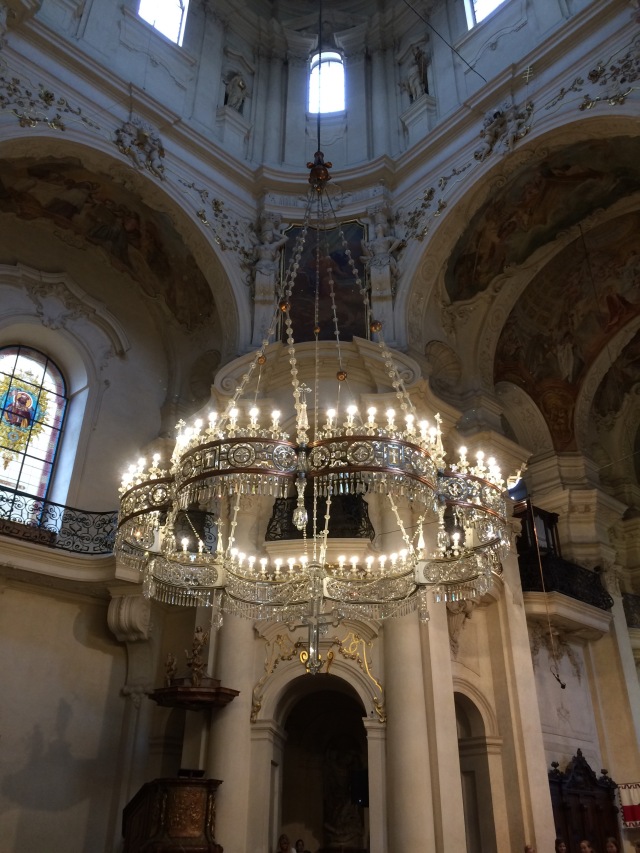 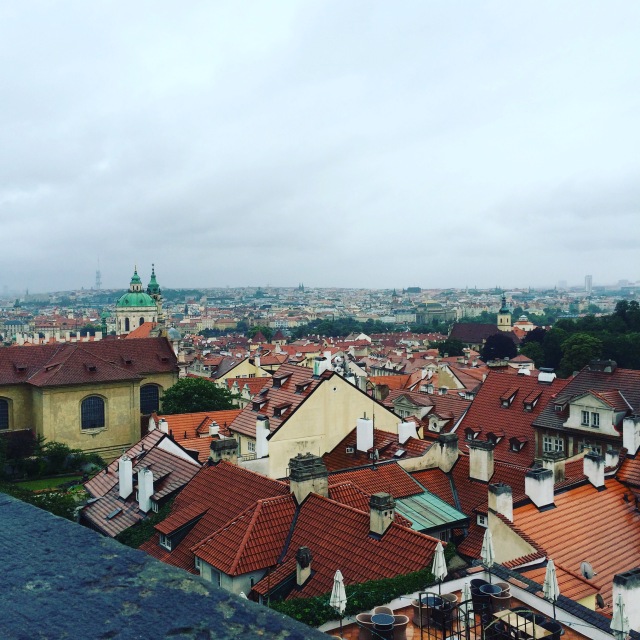 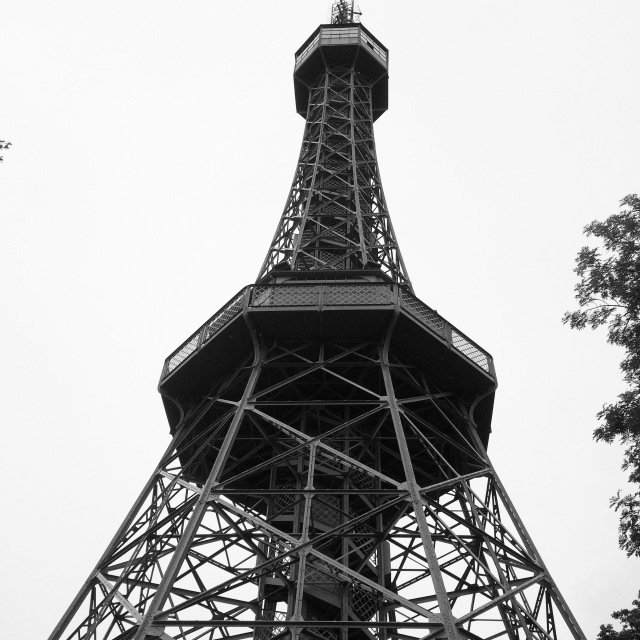 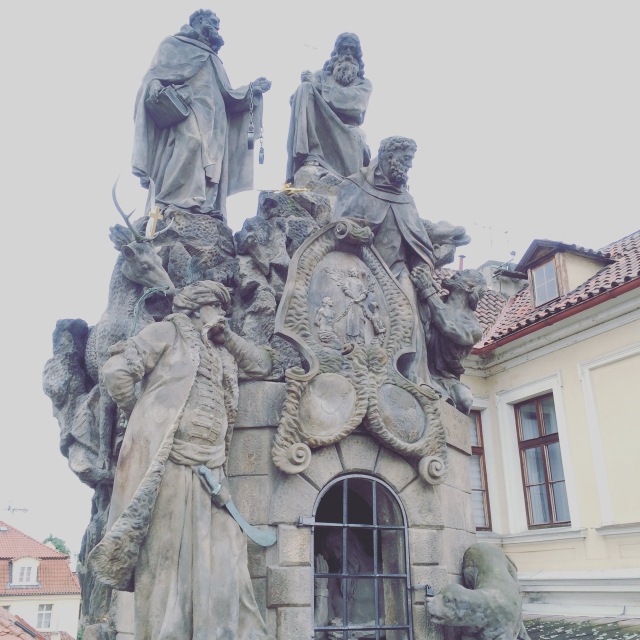 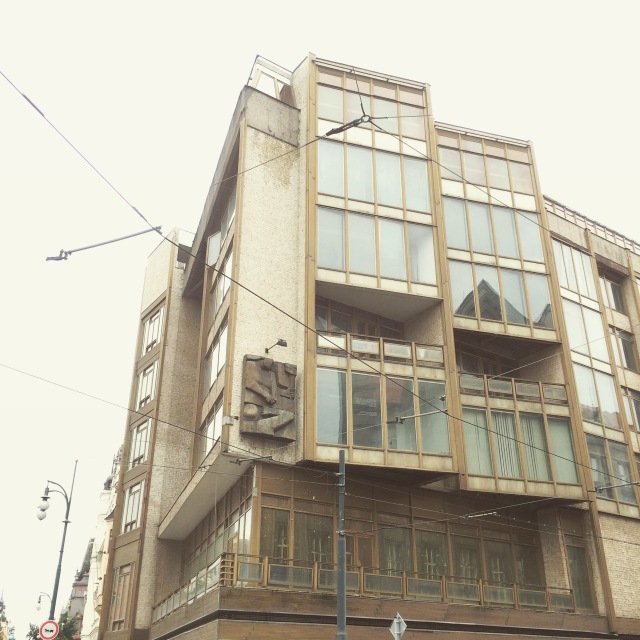 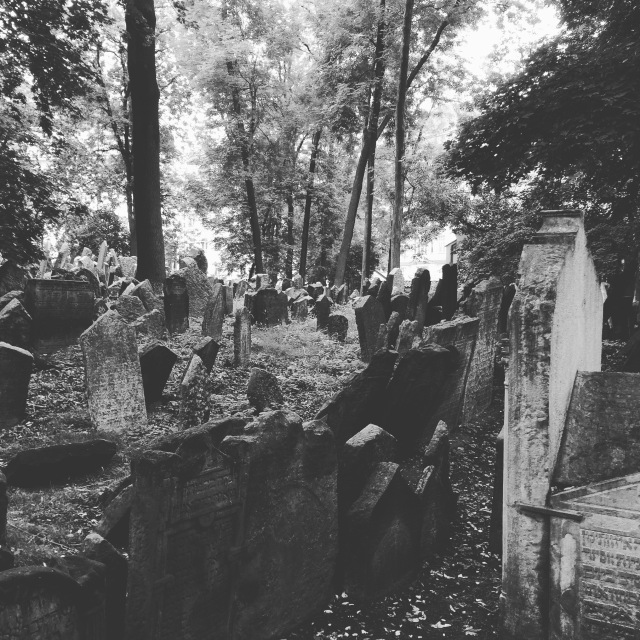 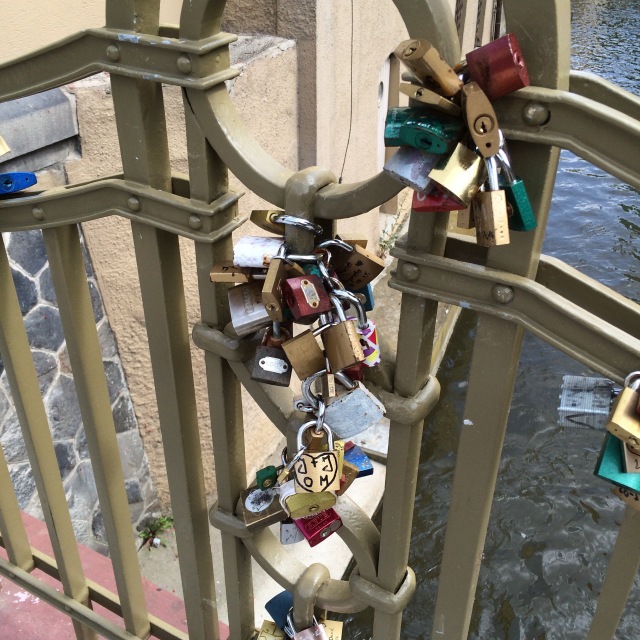 Other than that, we bimbled, learned about Kafka, 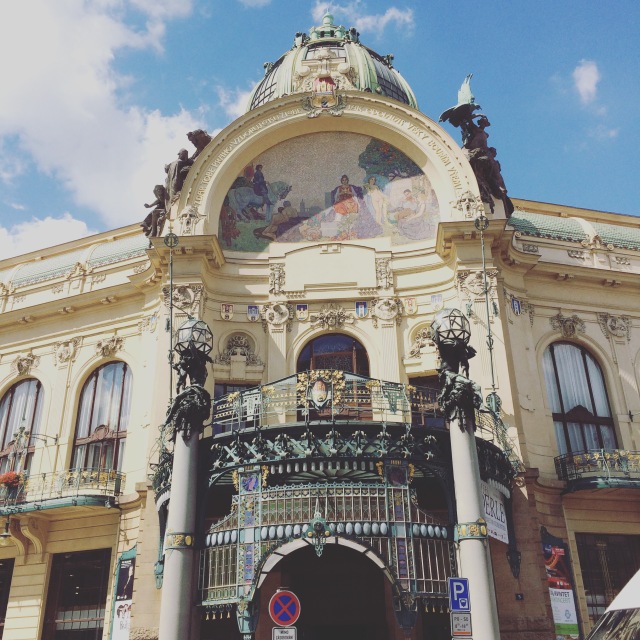 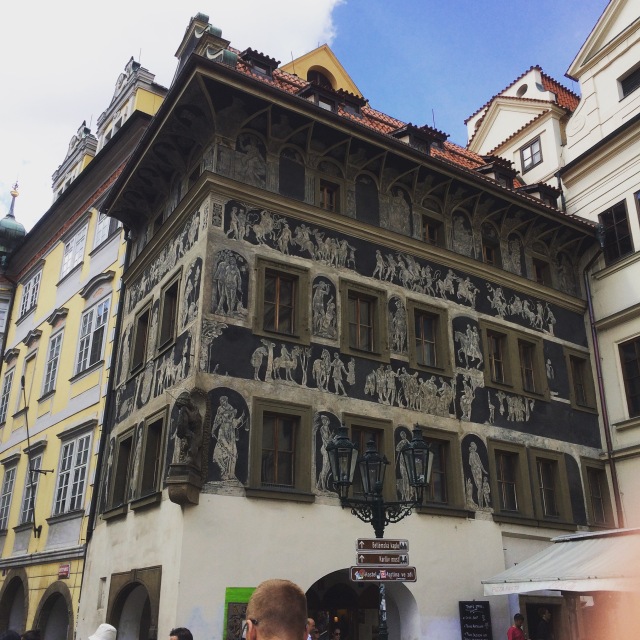 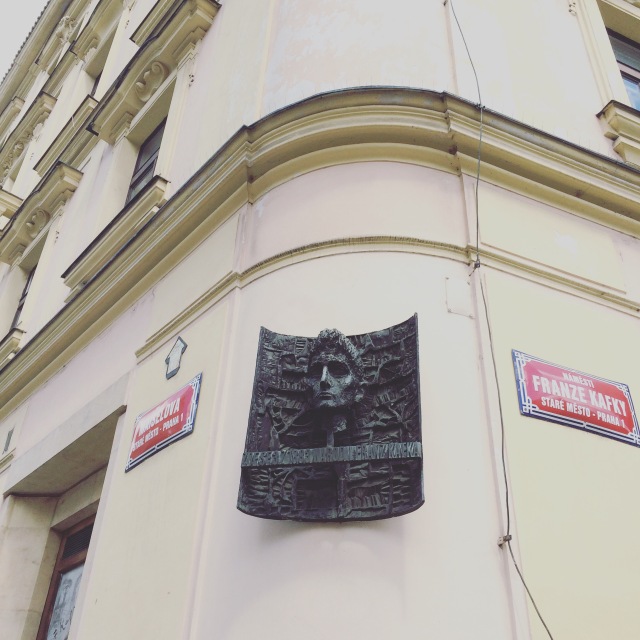 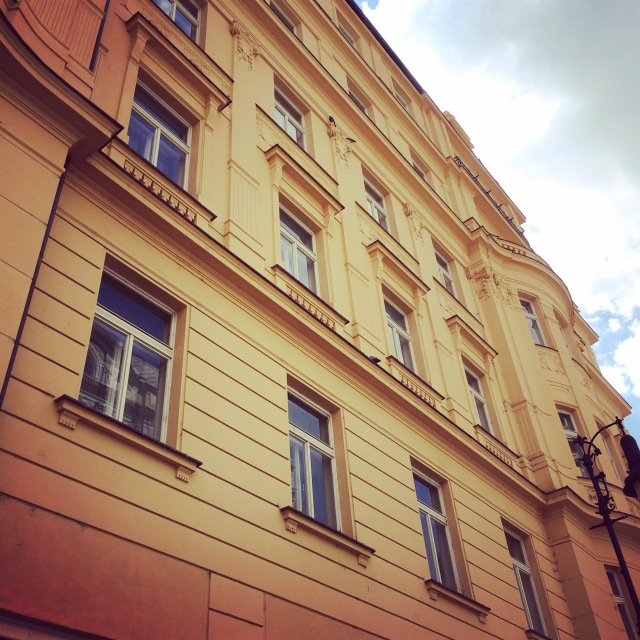 went up the tower that looks like the Eiffel Tower, ate an INORDINATE amount of pork – N ordered a pork dinner, and as we left the restaurant we saw two separate couples who’d ordered the same pork dinner between them. He ate pretty much all of his – I shared a little bit. It was very, very good. We lucked out and found an entirely gluten-free Italian restaurant, to which we went twice, and I nearly levitated with the excitement of a whole menu to choose from. We also found a traditional Czech restaurant which had a very well labelled gluten-free menu. It was heavenly. I had dumplings for the first time in I can’t remember how long. Awesome. 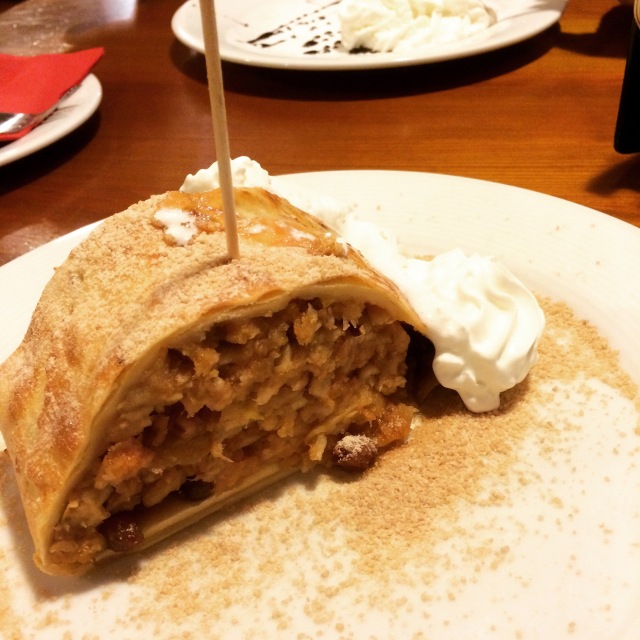 We also went to the zoo. And saw a baby elephant and got as close to a tiger as we are ever likely to get. 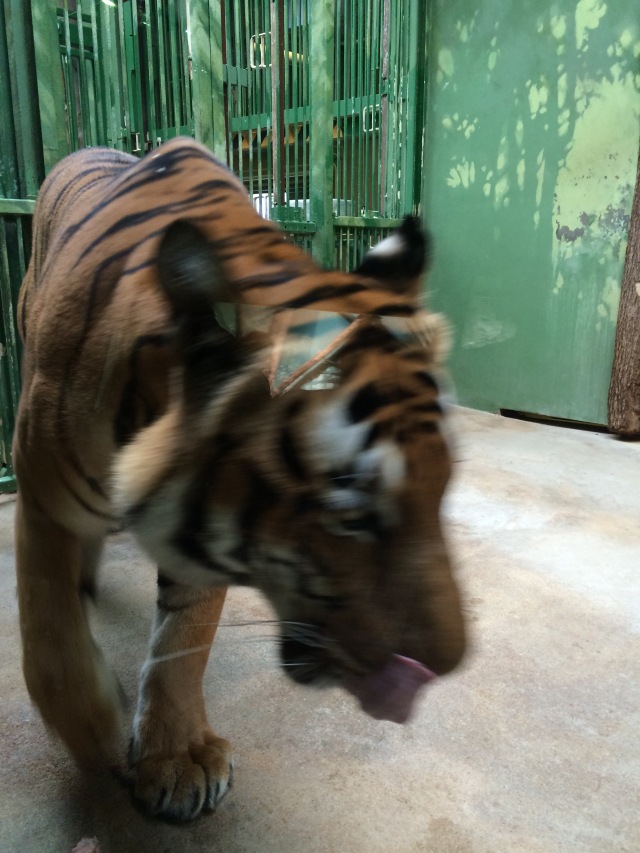 We like Prague. We’ll be going back – but the next trip booked is Venice in December. I’ve long wanted to take N to Venice, and I finally got my act together and booked.
Today, N’s at football (#COYS) and I’m going to knit and knit and knit. It’s our second wedding anniversary in a fortnight, I am nowhere near done on his sweater (cotton), and this is an excellent opportunity. There’s not much Guidemin that needs doing, I’m on top of the laundry, and, while I might have a pootle into town for a Sticky Coffee at Starbucks, that’s about the limit of my aims for the day. Well. I might tidy up the sitting room a little more. I’ve been scattering my possessions again.