The first two miles were hideous: uphill, into the wind, next to the main road (N needed an easy 6 for his marathon training). I whined a lot about lost fitness, not really having run for about a month. The rest of it was easier going (less wind, less hill) and thus I felt reasonably happy and, while I have undoubtedly lost speed, I still have stamina, or, possibly, stubbornness.

Either way, I’m knackered in a good way now. And I will manage to sleep tonight.

I might also have entered the Trionium Midsummer Munro half marathon as I’m going slightly batty with nothing to aim for. I’m then planning the Farnham Pilgrim half in September. Both are trail races: and thus I don’t feel the pressure to cane it, which fits with the whole trying to exercise less intensely thing.

Meanwhile, because I’m heading over to Indianapolis and will be away from N at the crucial point ovulationwise this month, I am having a month of wine and unpasteuriswd cheese and general misbehaving.

Two months of not running (made worse by three weeks of really not running because of a cold and a sprain).

And the net result? Two periods and jeans that feel tight and thighs that feel flabby and the beginnings of a double chin.

So really. No actual improvement other than being slightly less anxious. Which is of dubious benefit.

I need a pep talk. Before I start wallowing in a pity party.

Majorknitter always used to like a knitting photo post. Please excuse any repeats. I’m waiting for a database to restore…

In no particular order

Socks for Nikki. She basically dared me on Facebook.

A pink pussy hat. Protesting is a serious business. Also, I made it a tad too big.

A slipcover for Oliver. Knitted mostly in the round because fairisle purl is not my strongest point.

Peace de resistance mittens. I’m getting all political. Yo.

Not knitting: the cover gift from this month’s Mollie Makes. Should have done the whole thing with 3 or 4 strands. 6 strands of thread were just too bulky for the needle.

Sock monkeys by Cookie A. Originally destined for Emma. But coming out me sized.

But it’s OK. These are for Emma. You can’t see it very well, but the yarn contains a strand of stellata sparkle. Which makes for rather luxe grey socks. 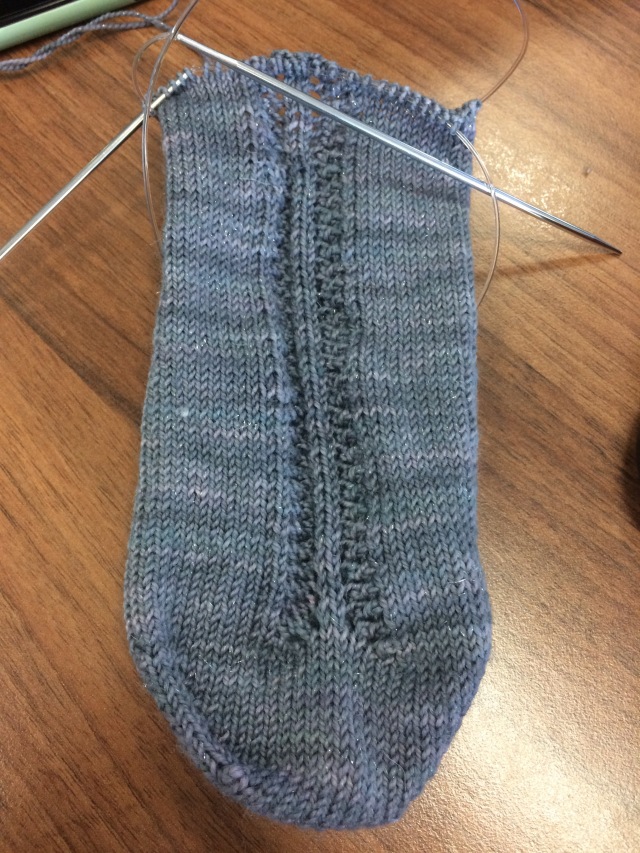 Of course, we should also have the original to which it’s an homage….

If anyone wants me, I’ll be investigating Ingrid Michaelson’s back catalogue…

I sneeze, therefore I am. I’ve caught N’s cold (it seems to be a short-lived cold – he was iffy on Tuesday, exploded on Wednesday and is mostly back to normal now), and, unsurprisingly, it’s hit me after my first run in 2.5 weeks (2.2 miles, 9:30 min/mile as I was being lazy about putting the HRM on). The verdict from the run: my ankle’s not right yet. But it’s not awful either. Spot more mollycoddling required.  The Rock Tape has definitely helped.

And otherwise? 3 hours worth of guidemin (mostly putting together an epic food order for the leaders’ weekend which will need masses of changing because people are changing their minds on what they want to cook, particularly because we no longer need to accommodate the lady who has issues with tomatoes). Found the deeds for the house (was trying to find out if we have cavity wall insulation. Whereever this information happenst o be, it’s not with the deeds). Discovered how many times the extension has been built. Looked at the old plans from when it was a shop. Considering getting a sign saying ‘The Old Corner Shop’ as its address used to be ‘The Corner Shop’.  Also found a small batch of paperwork which is nothing to do with us, so will have to return that to the conveyancers.

I’ve written some Valentines to my MP, my local Councillors and my Local County Councillor, as part of Action #3 from The Women’s March. I’m supposed to be building a website for our local huddle this weekend, but right now I’m feeling too bleagh. Yesterday I spent haring round London (the flat needs new carpet. And underlay. And the tenants have been told if they don’t sort the mould problem out, they will lose part of their deposit because I have never seen either the back bedroom wall or the bathroom *that* mouldy. I’m quite upset it’s got to that point…it’s the first time they’ve not lived at home, they have to learn these things). I spent 2 hours mentoring. I bought polyester wadding, and my MiL’s Mothering Sunday present, and also got a rather cool journal for me (I think it’ll help the mindfulness – I’m doing Ruby Wax’s course. She’s awesome. I may be reiterating – but I feel understood). I bought tape to mend the rips in the lining of my favourite winter coat. I think pretty Liberty Print Bias Binding will suit very well. I’m torn between spending the rest of the evening sewing that, and de-fuzzing the garment, and finishing the first of my Peace De Resistance mittens.

It was the annual morris dancers’ winter feast last night. Such awesome Boeuf Bourguignon. Gordon started cooking it on Thursday, and the meat was ridiculously tender. And fried Polenta. And a brilliantly colourful salad. Excellent silly company, and some good catching up. I feel fairly well fuelled. I have a vague idea about making a mug cake while N goes to watch Trainspotting 2 (we were both going to go – we (re)watched it on Laser Disc this afternoon. However, I just don’t fancy going outside. Too cold and damp out there. I have done nowhere near enough steps this last week, and frankly this week going forward is also going to be tricky).

Oooh! I’ve gained 8lbs since Christmas. I’ve just bought yet more secondhand jeans on eBay, this time an inch bigger (as opposed to October’s an inch smaller). I still fit my usual pairs – but there’s going to come a point where they’re just going to look wrong, so I’m Being Prepared. I’m now about to go and spend the voucher I got for subscribing to a newspaper on some slightly comfier bras…I am busting out of my usual ones. If you’ll excuse the pun. It’s rather nice having a spot of cleavage.