I’ve banged out 8 miles at an average 9:17 min/mile and sussed how to get the strava app to tell me the miles as I run, and how to get it to auto-pause (handy as I had a gel at 4 miles). It was grand running as the sun began to think about setting: such a lovely golden light.

I’ve taken my laptop to have its OS reinstalled (my profile corrupted. I have had my laptop for 9 years. I don’t want a new one), and hopefully get it to keep running for a few more years. I may have lost the Christmas Card spreadsheet in the process. I backed up everything else. With luck this will sort out its tendency to freeze and hiccup. LK got hungry just as I was booking it in, inhaled boob in the handy Mamas and Papas next door, fell asleep, then woke up in the lift. She has napped for a grand total of half an hour today.

I have bought a rather smashing silicone mat thingy with built in food catcher to take to Canada with LK next week (baby led weaning is a messy business, and I am slightly germ phobic when away from home. I feel that this mat thingy is an improvement on anti-bac wipes).

I have managed to have a sensible, grown-up conversation with N and sorted out most of the whinge. I also gave myself a firm talking to while on my run, on the subject of why I feel guilty asking N to look after LK. I think it boils down to my Mother (don’t so many things?!).

If I wrote what I wanted to, it would be one long self-pitying whinge. So let’s not do that to anyone who may still be paying attention.

Instead, let’s focus on the fact that N is almost home and thus I should be able to manage 8 miles before sunset. And let’s also focus on the adorably cute noises LK is making in the jumperoo. I think she may want some milk before I run, though. Which is fair enough. Although there is a bottle handy, so I may run and let N feed her.

LK loves the singing kitty that Granny bought her. N & I, on the other hand, find that its inane tunes are permeating our very bones, and that if we’re not diligent, our days have their very own silent theme tune. Occasionally, this breaks out into song.

We all went for a run on Saturday: a badly timed nappy meant we missed parkrun by about five minutes so we beetled along the canal in the opposite direction. LK fell asleep (she seems to rather like the running buggy. We got a secondhand Nipper Sport on a friend’s recommendation, and it’s awesome) and we managed 6 miles. One of which was practically at marathon pace. I’m so lucky to be able to manage 3 runs a week: and while I’m on maternity leave, and now she’s bigger, one of those can be during the day. Once she’s at nursery, I am cautiously optimistic about being able to drop her off early once a week, or collect her slightly later, and have a run in daylight. The runs of the past month or so have been mostly after 8pm, and after supper: it is not fun running on a fullish stomach (but does mean I seem to fly, relatively speaking, if I can run on just breakfast now).

The last week has flown. I have seven more weeks of maternity leave then back to work (unless I want unpaid leave…) and, honestly, seven weeks doesn’t seem like enough. In the midst of this, we have the endurance test of a long flight to Canada with a baby who is too big for a bassinet and who can’t have her own seat owing to not having the correct type of carseat… we may well be relaxing the strict no screen time rules to get us through this one. I need to load up the kindle app with picture books (she gets one carryon for her luggage, so will be sharing mine, and books are bulky). We’re getting an activity gym shipped to one of my cousins to deliver for us, and taking the playnest, which currently corals her nicely. Then again, she can’t yet get herself into a sitting position on her own… she can sit. Just with help.

We are also having fun with baby led weaning. Last night’s stirfry went down very well. And over the floor. This morning involved an oatibix-yogurt face mask. Yummy.

It doesn’t matter how intense an office job is: looking after a baby is much more tiring. On the other hand, the giggles and smiles are much more rewarding. And you’re highly unlikely to find yourself going through three different teams and three different managers in the space of six months. I mean, I had one good and lovely manager on my first keep in touch day in September. A new team and manager (equally good and lovely) by my second keep in touch day in November. And a third team and manager by Monday of this week. Which makes my fourth team in the space of 3 years, and my fifth manager. On the plus side, I’m on the same team as someone who was on my first team, I’ve worked with most of my new team and like them all, and my new manager seems like a lovely chap (although I suspect he probably doesn’t support Spurs like the last two did).

It is a bit disconcerting, though, all this change. And I seriously, seriously need to get on top of powershell when I go back to work properly in April.

Running is going well. The snow last week made for a few treadmill sessions, but the last two runs have been outside in fog and rain. And the dark. I really dislike running in the dark. Intervals on uneven pavements in dim lighting are not my idea of fun – and it’s hard to get motivated after supper too (and not fair on N to delay supper for ages while I run). But: it seems to be getting easier. I managed a sub 9 minute mile for the first time in well over a year, albeit slightly hill assisted. I am Getting There. 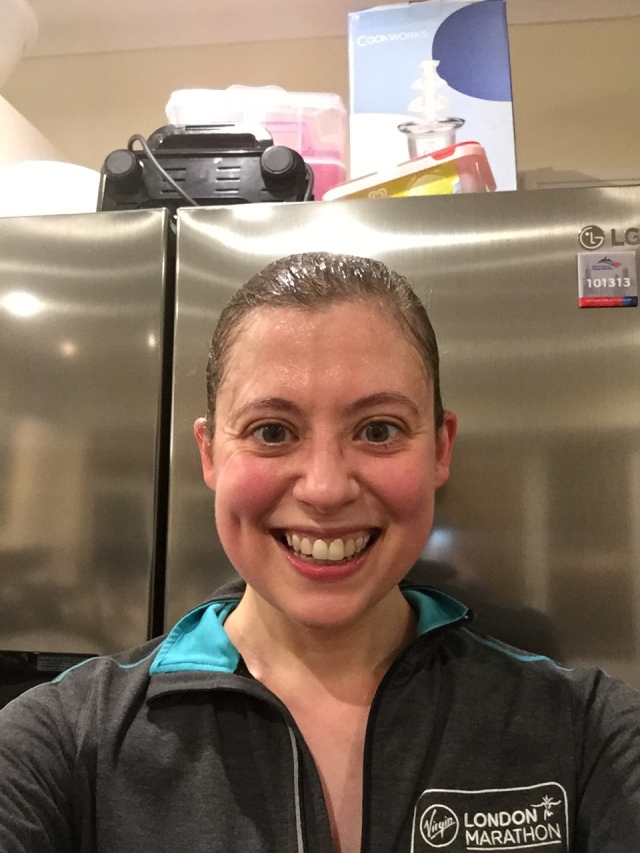 I used to write more here. I used to write longer posts, more frequent posts, better posts. Posts which weren’t thrown out at high speed simply to remember that I exist somewhere on the interwebs.

I’ve got a running coach now: the same brilliant lady, Laura, who ran (with Other Laura) the track sessions on Monday nights in Paddington. I was running my best with those track sessions, and I’m hoping to recapture some of that form on my own, outside a club. Between LK’s bedtimes and being out one night a week for Guides, and working in London one day a week, it’s just not feasible to join a running club at the moment. Heck. It wasn’t even feasible to get to parkrun last week. I slept instead while N amused LK.

LK is the most beautiful baby. She’s starting solid foods (Hello! Banana in my ears!) and making all sorts of bizarre noises. For someone so small, she is very loud. A chatty, happy baby: very little seems to upset her. Other than the parachute at “Movement With Mummy”, where N tells me she cries. This is really weird as she loved the parachute at Baby Yoga. I have missed her while I’ve been at work these past 3 weeks (one more week to go), but it makes the time with her all the sweeter. The 6am feed today was a lovely snuggle in the dark, with a heavy, sated, snoring baby in my arms. There will be photos today, and I’m faintly relieved not to have to listen to the musical Kitty toy. It sounds like it was voiced by Paloma Faith, and its demands to play, and for someone to “roll my ball”, while informing anyone within earshot that it is a “purr machine” are both faintly suggestive and extremely annoying in their cutesiepie squeakiness. LK has no interest in musical Kitty if it isn’t making noises. She has worked out how to turn up the volume. That said, she is also pretty good at turning the pages of a book, so it’s not all about electronic gadgetry. 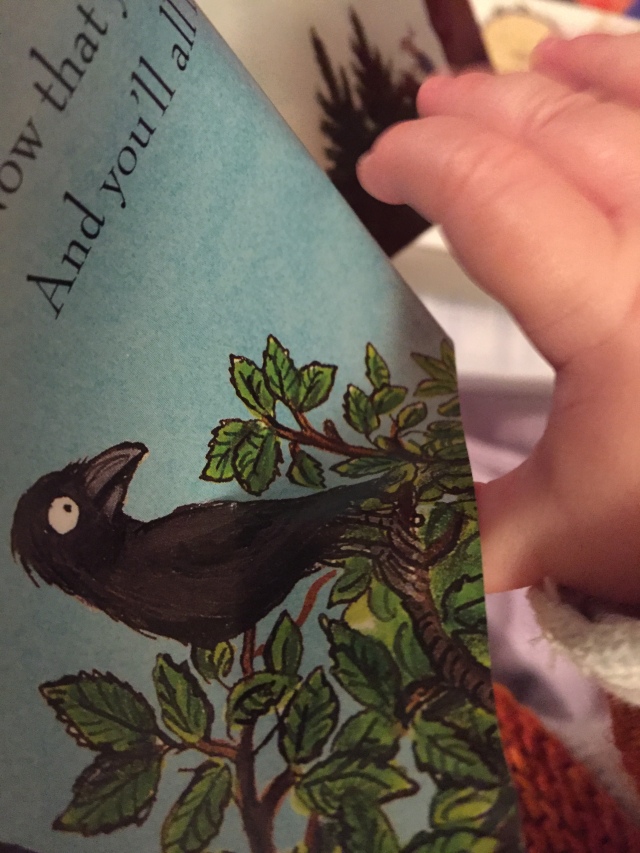 We still haven’t got her a copy of The Gruffalo (it seems that most of her books are by “the author of The Gruffalo”). We do like a good story. N can even read in Clanger. Her favourite is Tickling Tigers, so she now has her own copy of that. Personally, I’m rather fond of Hugless Douglas. I also rather like having a book lurking in the buggy for out and about emergencies outside the local Starbucks (Starbucks has a book barrel).

There’s been a heap of snow dumped at home. London, I see, as we get closer, is merely soggy. A few flakes failed to settle very much. 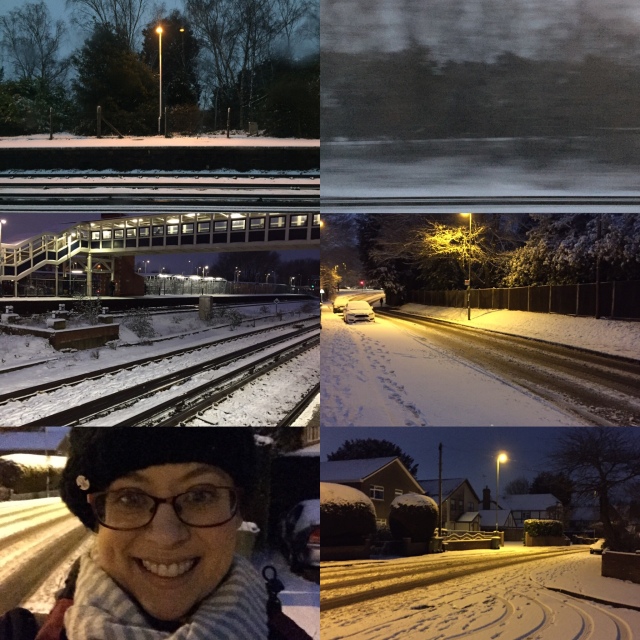 It was rather nice to crumple through the snow to the station at 7am. It being crisp and undisturbed enough to really enjoy. Plus, I have yaktrax. This makes it much easier to get a grip on the pavements. I am glad I’m not trying to run it in. Instead, I had a hidjously expensive trip to the gym on Wednesday night. On the plus side, I know how to work the running machine. Including the emergency stop button. It wasn’t safe to run intervals outside on Wednesday night, which was my only option for running. I had to defrost the inside of the car windscreen for heaven’s sake. 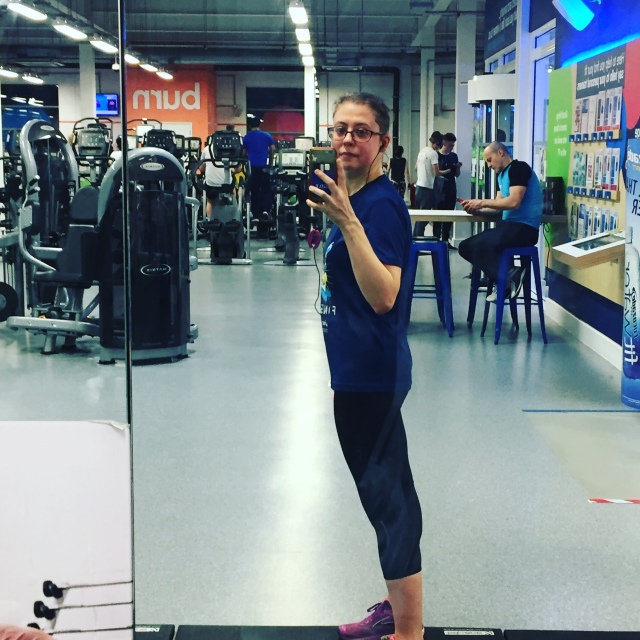 Nearly at the station. Let’s see if I can manage to write again next Friday.