I’m wearing secondhand clothes…even my husband’s been married once before!

With apologies to Barbra Streisland, but, Secondhand Rose has been my song. I wear a lot of secondhand clothes. I always have. The jeans in my last post were secondhand from eBay. Today’s jeans ditto. I do a grand line in secondhand coats and jackets, and dresses, and skirts. I used to love rootling round charity shops: now I tend to snatch a few minutes here and there depending on how fidgety LK is in the pushchair. From her perspective, the supermarket is vastly more interesting. More people. More bright colours.

Anyhow. Today is about secondhand bras. Isn’t this a beauty? 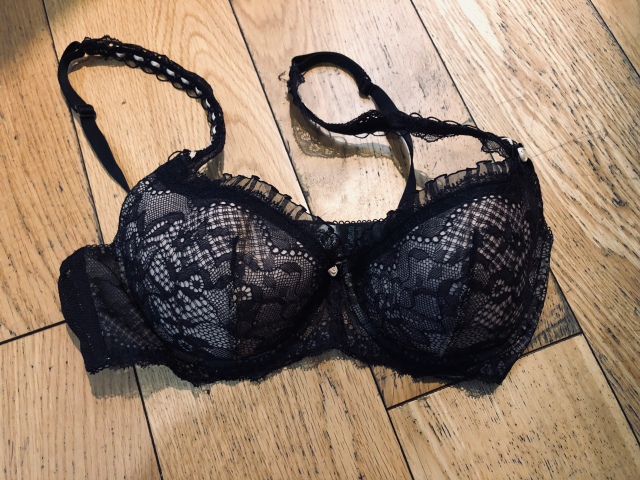 99p plus postage on eBay. I discovered I have 3 bras which actually fit me currently (I was a 30C/32B when I fell pregnant, and peaked at at 36D). What inflates, eventually, deflates. And there is very little point in spending money on anything that’s only going to be worn for a few months. However, 3 bras which fit isn’t enough to allow for nipple thrush prevention measures when on antibiotics (wash at 60deg or with Halo, clean bra daily) and a well fitting, comfortable bra is also fairly vital to my general demeanour. So off to eBay and I’ve got a total of 4 bras coming, and spent £11. I have also got 3 larger bras on sale, which look like bringing in about £10. And I can reuse the packaging the incoming bras arrived in for the outgoing bras. Score.

I’m not entirely done breastfeeding. I hope that when I am done, there can be another selling session. I am thrilled, though, that my pre-pregnancy sports bras fit again. My pregnancy/post-pregnancy ones have gone a very funny shade after a 60deg thrush wash. They lost brightness.

So here is my first try at not buying anything new. My jeans have worn. When I was at uni, I had next to no money. Well. I had savings. I also had a father who checked my savings book monthly and demanded to know why I was taking money out regularly. “Food, books, that sort of thing. Nothing exciting like weed.” I think he was a little disappointed that i has not developed a drug habit. I did a lot of mending my jeans, just to hold decency together.

This time, I went for a nice cheerful blue embroidery thread to sort out the hold. So every time I catch sight of my inner thigh, I am cheered up.

Not too shabby? I do like a good darn.

He was Born in Tarnopol, and he worked in import and export. His wife was called Neta. Their son was Khaim. He was murdered, aged 57 in the ghetto in Kupczynce, because he was a Jew. Neta was 45. I don’t know how old Khaim was. They’re recorded in Yad Vashem’s database by their cousin, Lea Shteinvurztel, along with 29 other members of Lea’s family.

On Holocaust Memorial Day, I light my candle, and decide to be more proactive about ensuring that it never happens again. And to keep being proactive. Regardless of how scary it is.

Standing up, speaking out. It’s important.

Can I get through 12 months without buying any brand new clothes (other than knickers and tights) for myself and LK?

I think I can. I think I can also make 12 months without new yarn if I unravel LK’s slightly too small shark hat and use the yarn for her next size up hat.

I did the Box Hill Knacker Cracker again, having missed it last year owing to a badly time cold. I nearly missed it this year, owing to a badly timed upset tummy (we all had it. N had it worst, but only for a week. Then LK and I seemed to drag on for weeks after he’d finished. It was not pleasant). The day before – suffice to say, I did not want to go out. And I deployed Immodium (having established that, yes, I could take Immodium and breastfeed).

It was easier than last time I did it, in part, I suspect, because I had not run 10 miles the day before. It was fabulous. It was hilly. It was cold. It was a long way from the carpark to the start, and even longer to get back. There was soup in a mug at the end. And a tshirt. And medals. I loved it. I love all the Trionium Races – my next is the Leith Hill Half at the end of February. There’s a cooked breakfast to be had at the end of that one. Superb.

Running has been vital. Work has been very up in the air, hard going with compressed hours (but so worthwhile to have a day to do housemin, which means the weekends can be all about LK). LK moved up a room in nursery. In some ways she’s thriving, in other ways – I’m not happy with her key person. There’s been issues with nappies, issues with nappy rash, issues with food (she got covered in yoghurt yesterday, and it wasn’t because she was waving the spoon around. Apparently they were trying to feed her, and she wasn’t having any of it. Tip. Don’t force feed the toddler. It makes everyone unhappy, and just makes for battles at mealtimes. Give her time, and encouragement. You don’t get yoghurty socks that way.) Yes, I shall be complaining. I’m really unhappy about this one. I want to change her key person. I never see this key person anyhow, I always see one of the other assistants, who is, hands down, lovely. It’s bad enough leaving her at nursery each day, but to think that she’s fighting food – that’s not fun at all.

So running, is vital. And I’m about to have a lunchtime run date with N, in this nice cold weather. 10 mins warm up, 7 x 2 mins at 8 min/mile, with 2 min recovery. I have a new to me Garmin Forerunner 220. It’s awesome. I can programme in the intervals! And it just goes beep-buzz to tell me when to change. I can see the laps easily (and I have learned I don’t need to press a button between laps), and it’s just so much nicer than my old Forerunner 15. There’s still a bit of life left in that, so I’ll be popping it on eBay at some point, as it’s a lovely beginner watch. It just doesn’t have the battery life in it anymore to get through a whole marathon with a HRM. And, since I’m doing Tallinn in September, I need that.