While we were up in Scafell (April. It seems so long ago!), N and I did some proper woolgathering. We picked up some rather manky looking bits of Herdwick fleece which had been abandoned by various sheep on their travels. Full of moss, grass, sticks and goodness knows what else. A particularly large bit came out of a gorse bush. That was prickly.

Then I carded it, and, come July, and the eponymous Tour De Fleece, I got the drop spindle out, and had at it. By the end of the fortnight, all of it was single spun, and one ball had been plied.

It’s now all plied. And I’m mighty proud, despite the fact that I’ve over-plied it (it’s a learning process). And it’s still a bit uneven (Herdy fleece is curly. It’s not the easiest thing to manage).  It’s been bathed and it’s twisting in on itself. However, it looks like wool. Somewhere between laceweight and sportsweight, with a few thicker bits. 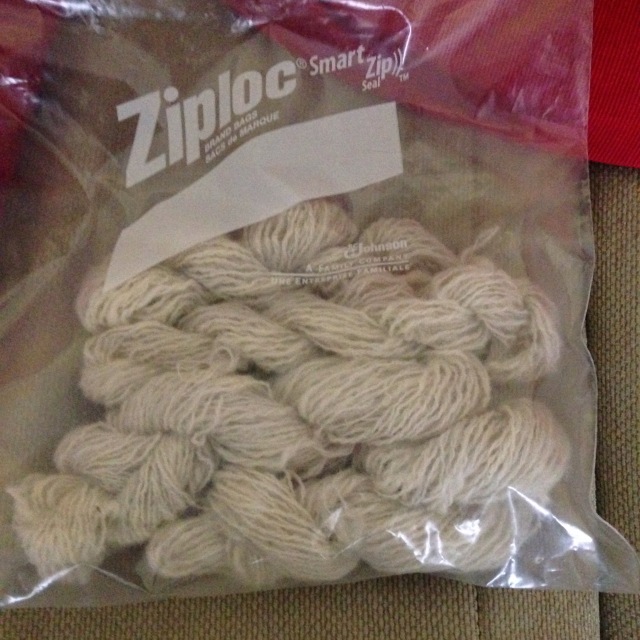 Next stop: a spinning wheel.

Meanwhile, a new chapter for “Jane goes running in the Park and sees celebrities, or, possibly, really needs to get her eyes tested.” Either Michael Palin, clad in a fetching running vest and blue shorts combo, waved at me, or, alternatively, some old block with Michael Palin’s hair waved at me. Wildlife spotted: one meerkat, one camel, one monkey, no tapir, no tiger, and a handful of poodles and whippets (one of which had a very smart red fleecey jumper). Seven miles, average at MARATHON PACE! Which is nice, as only the middle 5 miles were supposed to be at pace. I did get the whole “I’m nearly home, there is energy here” speed up…

I am now in serious need of caffeine, having had about five hours decent sleep (and an hour or so of restless sleep).